20 Members from the Media immersed in High-End Virtual Reality at the same time - being guided by Saray Kumalo the first black South African women to summit Mount Everest.
More Information

We were recently asked to provide a virtual reality activation for 20 people simultaneously at a launch to the Media. If you are in the virtual reality industry you will know how technical it is to setup multiple HTC VIVE virtual reality systems in the same room. If you are not in the industry believe us when we tell you it is one of the toughest things to do in Virtual Reality especially with the high-end HTC VIVE systems which offers some of the best current virtual reality experience.

For every 25 square meters you can have a maximum of 5 HTC VIVE units. For this media launch we had to cater for 20 simultaneous users from the media. To make things even more complicated is that you cannot setup another set of VIVE’s next to each other and just add two more base stations. When another set of base stations see the other base stations then the tracking doesn’t work, and you render the complete setup useless. In order to have more HTC VIVE virtual reality headsets setup you need to either move them to another room or create a physical barrier between the Base stations so that they do not see each other. To make it even more complicated the infrared bounces off the Virtual Reality headset and reflective surfaces which can in turn cause even more disruption and render the complete setup useless. 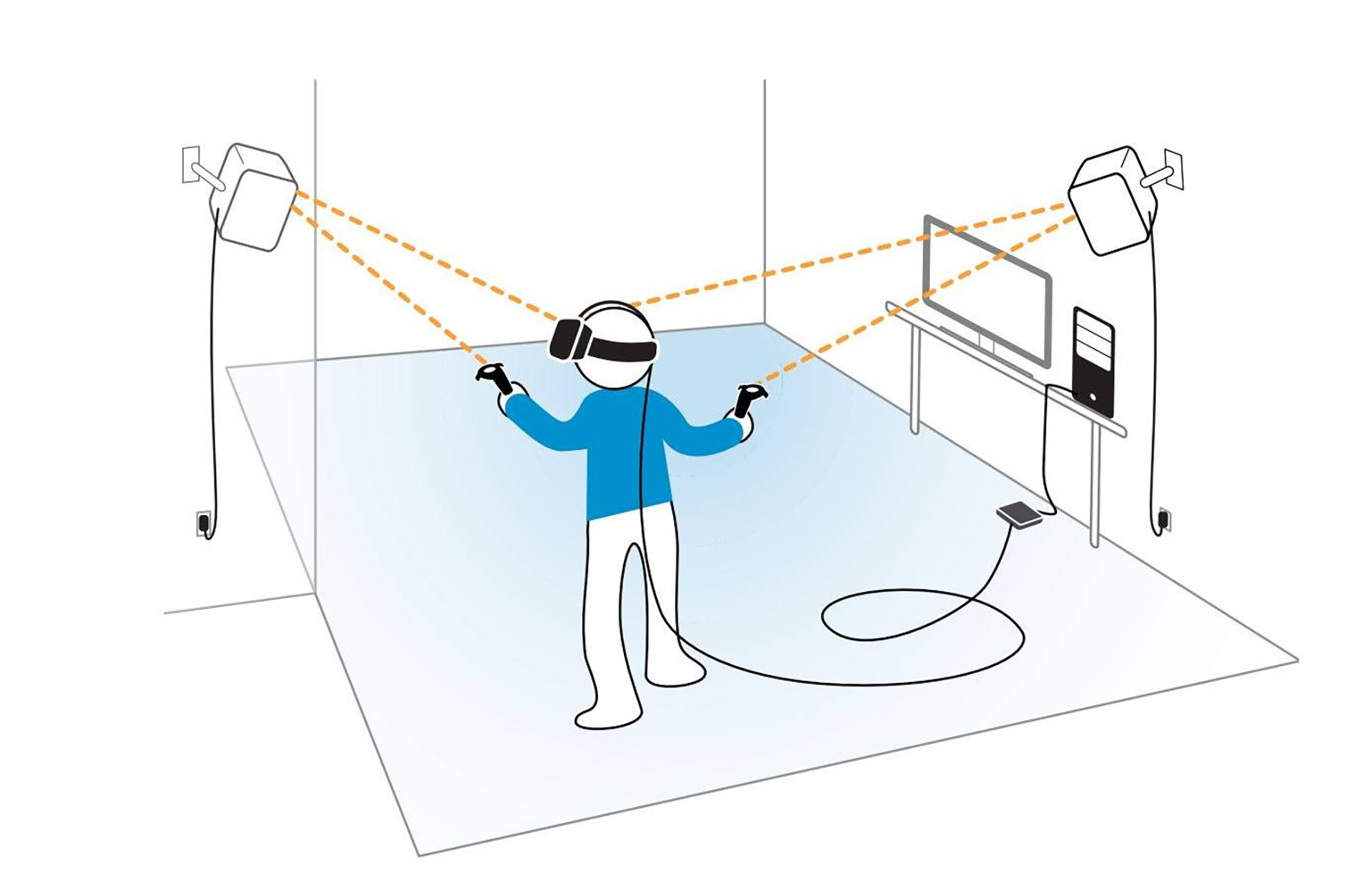 Above is an image of a typical VIVE single user setup. As part of the Media Launch in Virtual Reality we had to setup 20 of these stations in order to accommodate 20 journalists at the same time. 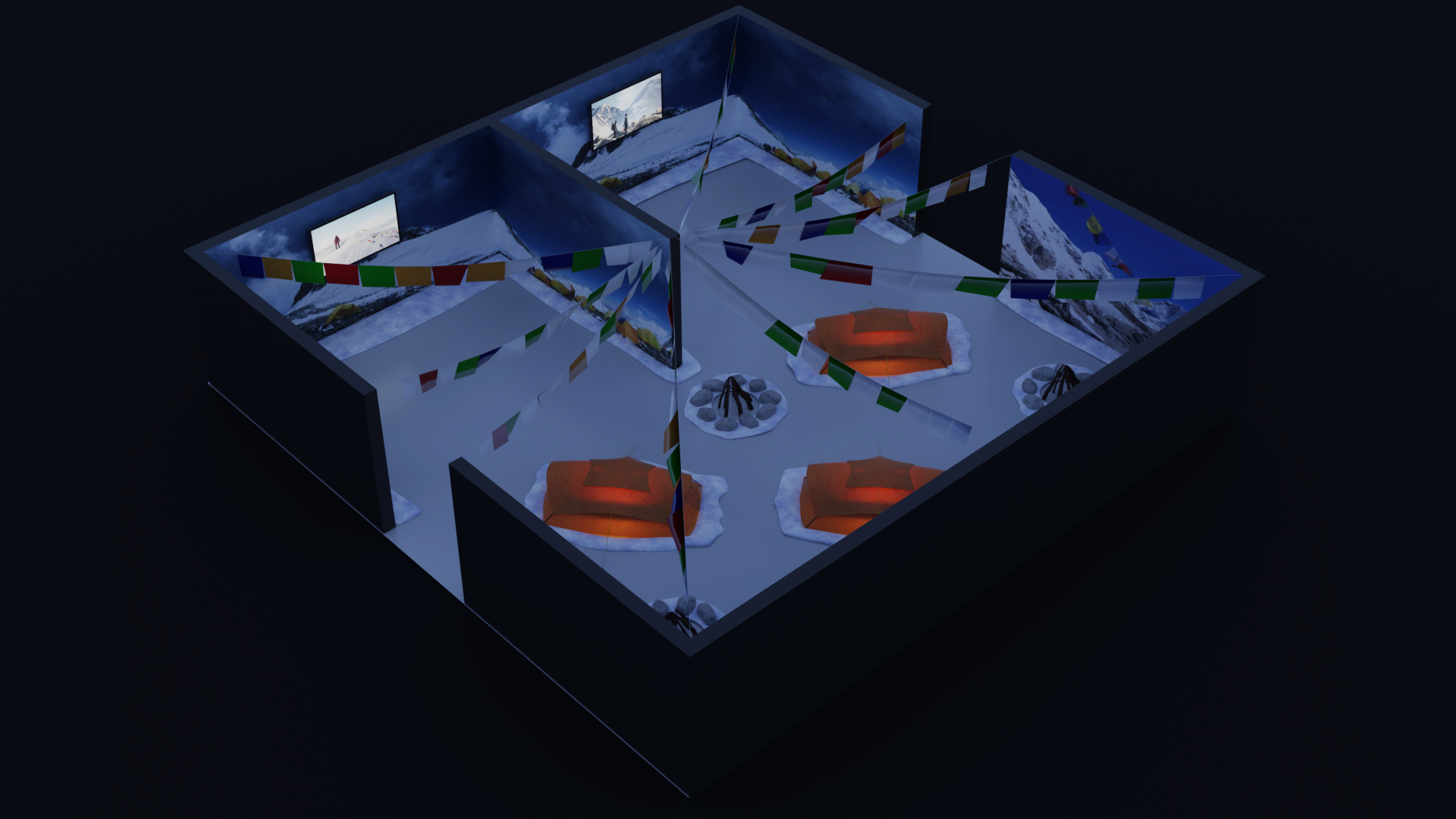 Above is a 3D Render that we created as part of our pitch to the client and to determine optimum setup of the HTC VIVE virtual reality systems. As far as we know no other company in South Africa has setup so many HTC VIVE systems in one room before. It was quite a challenging task but we have managed to get it done! – for us this is quite an achievement.

We envisioned the stand to look something like the 3D Render below. Resembling base camp. We were able to source original prayer flags, built an altar similar to the one found at Mount Everest Base Camp 1 and also had some climbing gear and tents setup in the display area. To take things to the next level we laid down snow blankets on the floor, had snow machines as well as ambient fog to cover the floors. 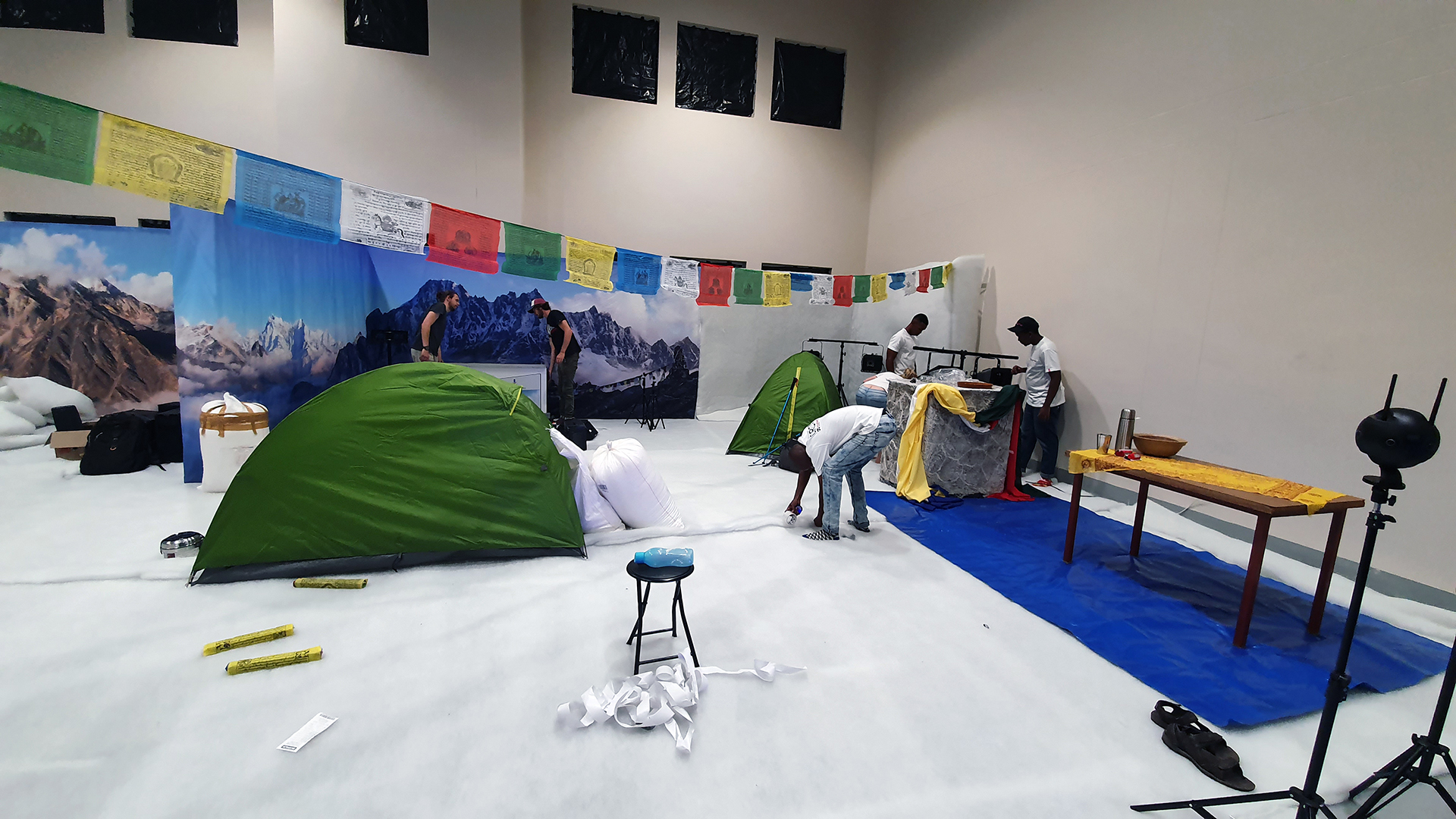 Setup of the Virtual Reality Mount Everest stand for the Media Launch. 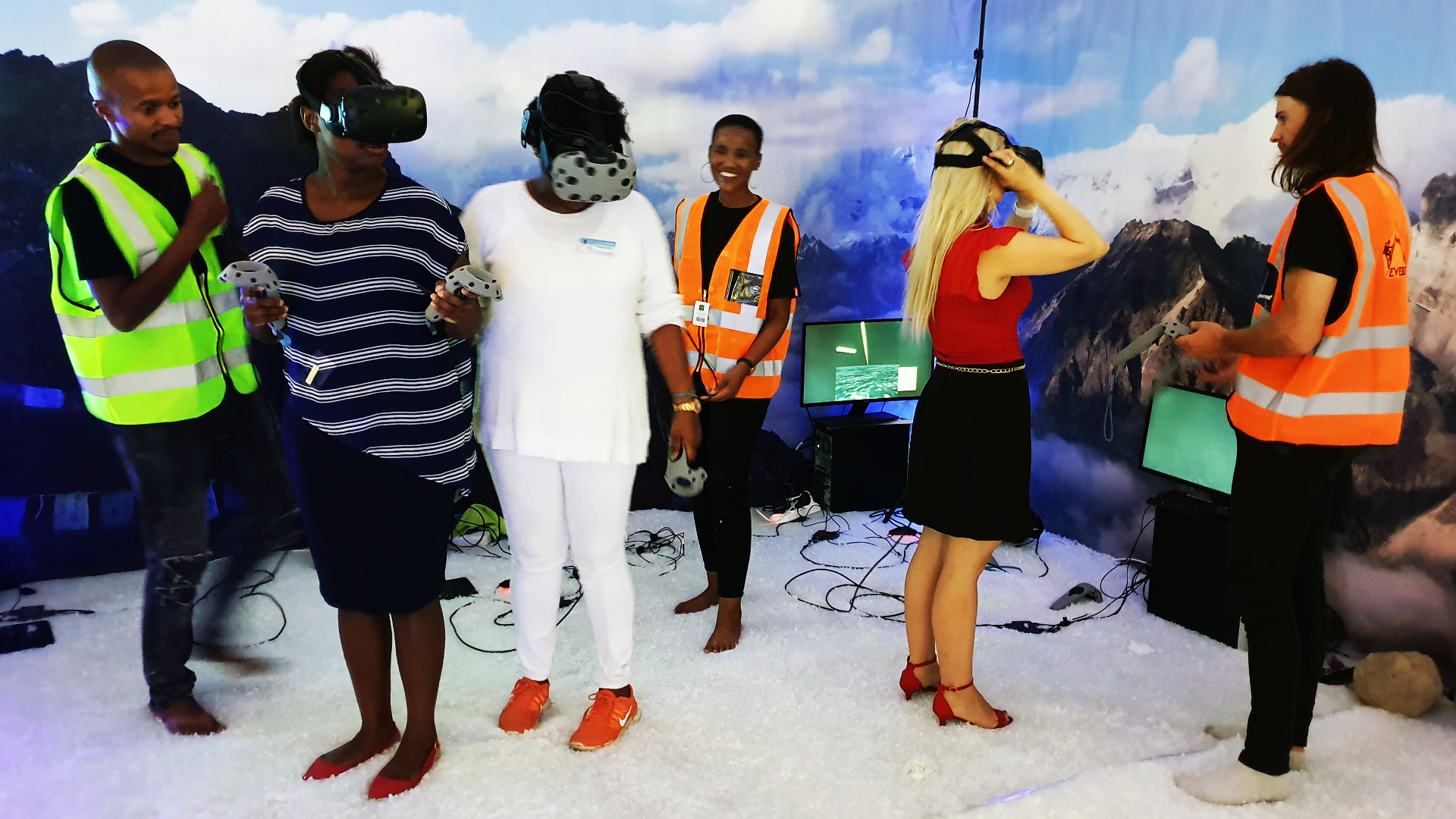 People inside the virtual reality experience 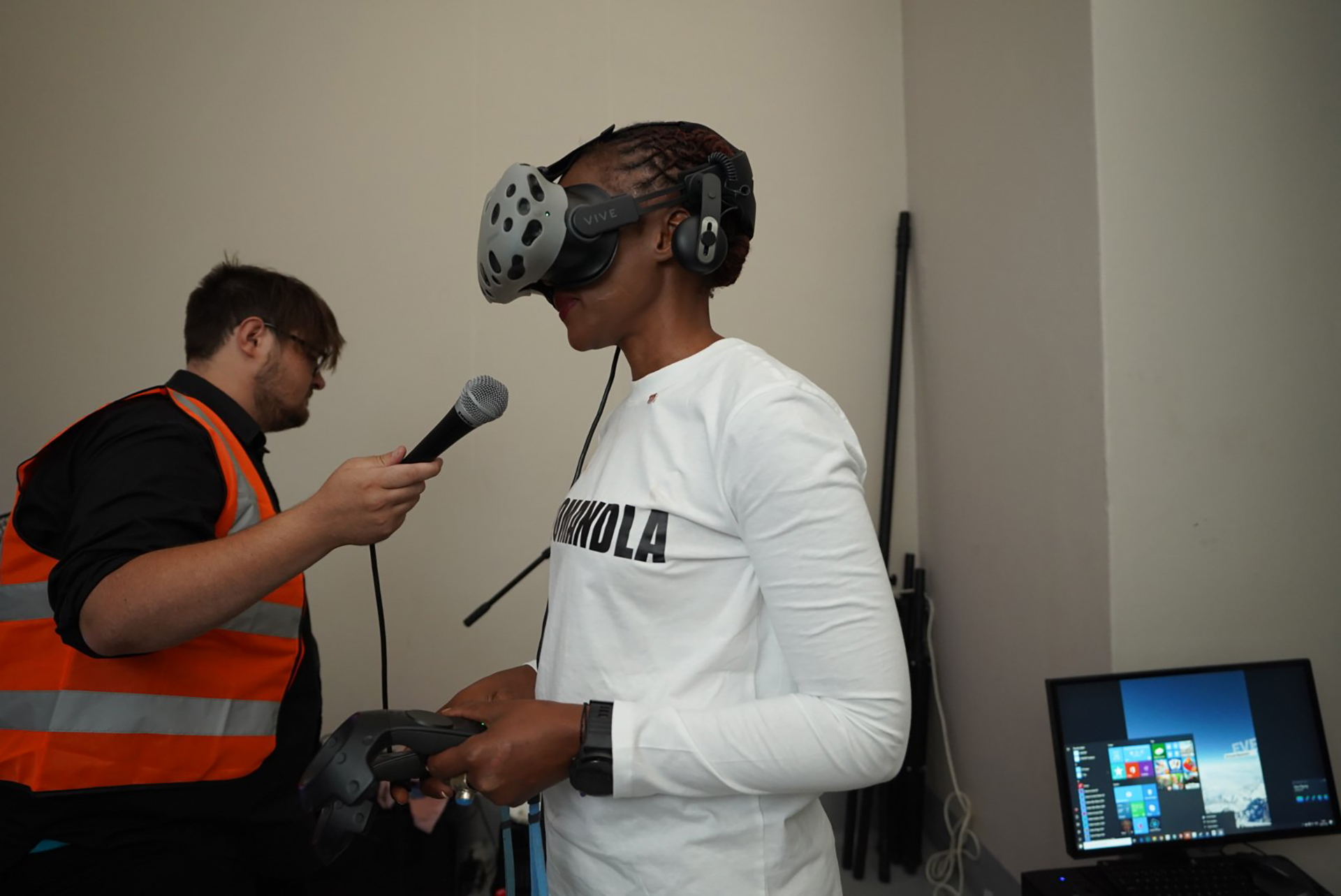 Saray Kumalo – In Virtual Reality guiding the Media through the Mount Everest Experience. 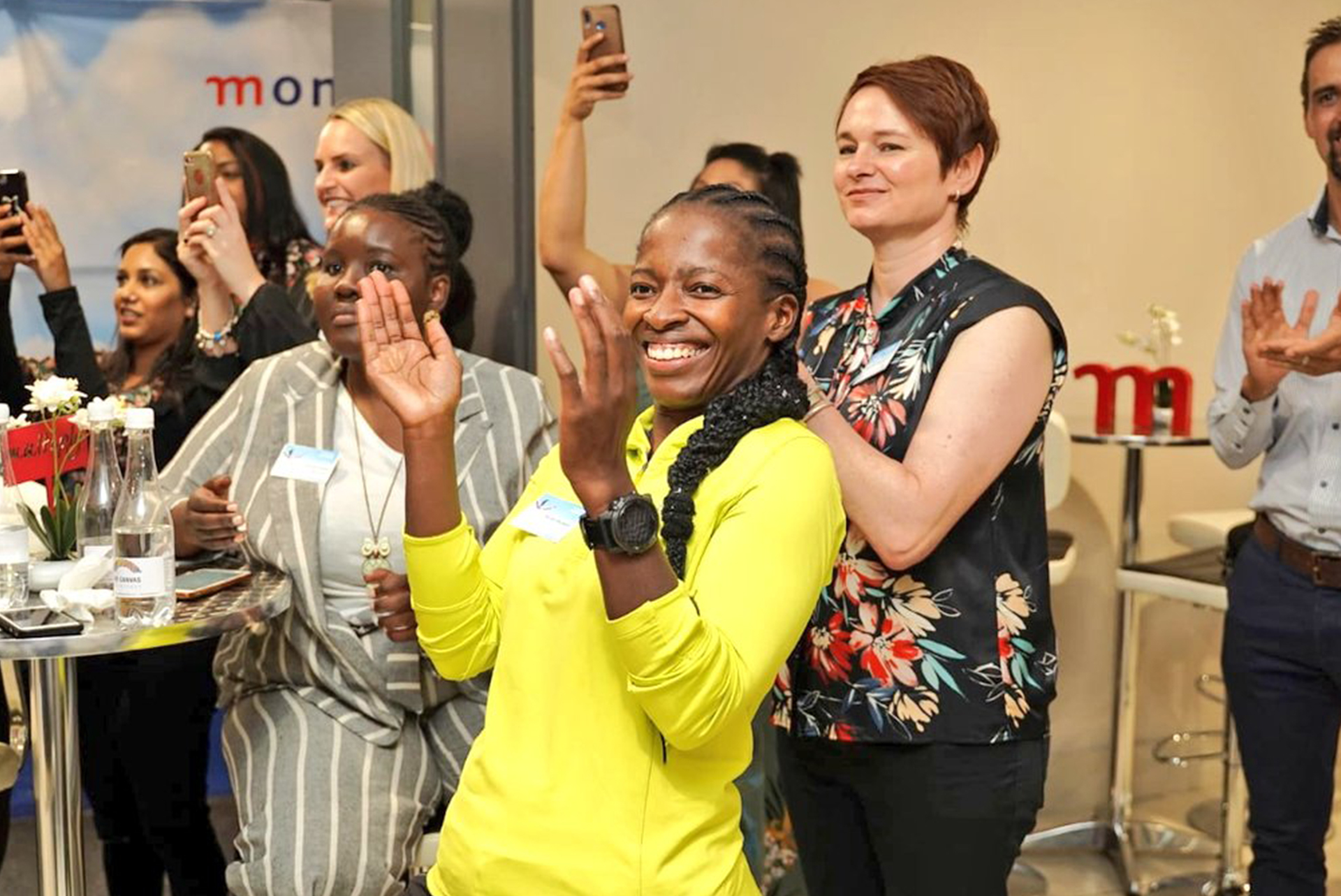 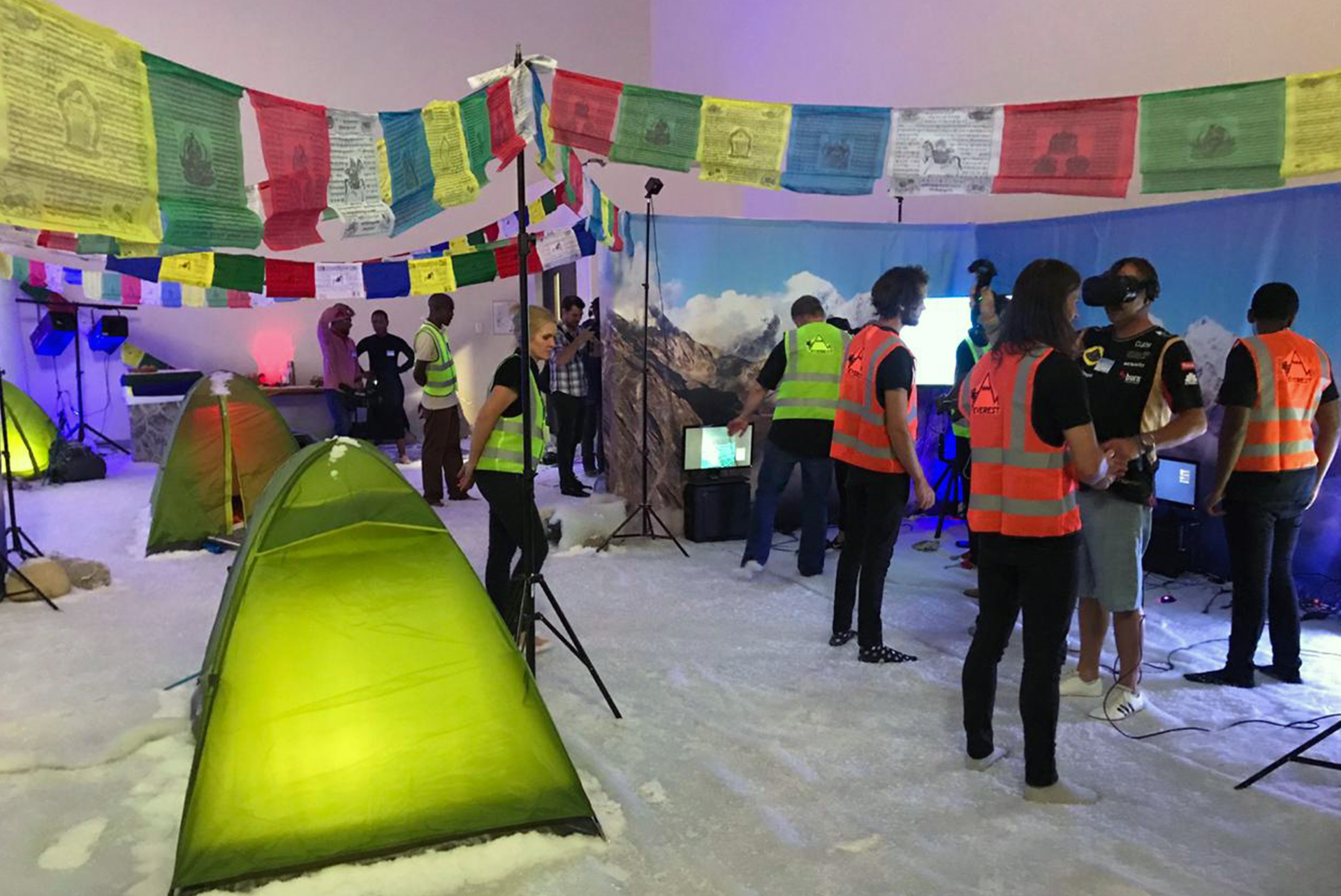 Talk to us today if you are interested in getting your own virtual reality experience. We are here to help!